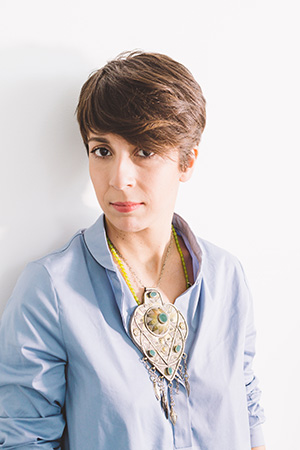 The family background of Narguess Hatami, the creative soul of the new line Miahatami, already talks of design and creativity at the same time. She was born in Teheran in 1981, her father is an architect and her mother a fashion designer. After earning a scientific degree, she choose to continue her studies in Italy, bringing with herself and in herself the heritage of an ancient culture, a valuable and incredibly refined one. She joined the Faculty of Humanities at the Università degli Studi in Bologna, following the Degree Course in Culture and Techniques of Costume and Fashion.

Her privileged relationship with art plays a crucial part in her approach to the concept of style and elegance. From a very early age she felt the artistic attitude within the family and can improve her penchant for painting and drawing following a year a private course in the study of the master Aydin Aghdashloo.

Starting in 2005, Narguess took her first professional step at Paola Frani. In 2008, she became Assistant Designer at PF, the line which joins the other two – Paola Frani and Scrupoli – and was the most significant in terms of turnover.

In 2009, Narguess Joined Macerata, alongside Massimo Giorgetti, Creative Director of Manifattura Paoloni, working on the new Men’s and Women’s line MSGM, dealing directly with the realization of the designs of the collection, development of the prototypes and the preparation of the collection presented at Milan Fashion Week. She was also responsible for material and accessories research.

In 2010, Narguess Joined Pesaro, cooperating with Marco Morosini, where she has the full creative and productive responsibility of the handbags and accessories line Brandina The Original.

A year later Narguess became the designer and collection manager, as the right hand of the Creative Director of AVIU, a knitwear line produced by DFG, participating in the ideation and realization of the collections. She was also responsible for the U “capsule” of AVIU launch in 2009.

… And the turning point comes with the Fall/Winter 2015-16: the Miahatami Women’s line of clothing and accessories is launched and the company which owns the new brand is founded.

Narguess Hatami offers the public a global style project which bears her name. Or rather, her surname, combined with the possessive adjective which underlines how this project belongs to the designer and fully reflects her aesthetic credo, her roots and her know-how which developed over these years.

Miahatami shows an approach to fashion design with a well-defined identity which nevertheless has many facets and permits thousands of interpretations, It is an approach that aims to be a “meeting point between Middle East and European design”.

Without the minimal concession to ethnicity, Narguess brings in her collection and in general in her style, her love and familiarity with a millenary, extraordinarily rich, noble and sophisticated culture: the Persian one.

Nonetheless she expresses suggestions and references which come from far away thanks to the know-how acquired over the years and also thanks to her mental “habitus” inclined to planning and to a proper architectural rigour with an absolutely contemporary touch, fully belonging to the 21st century and even projected decisively towards the future, due to the strong contribution of technological know-how which runs the entire collection.

The result? A style defined by the logic of a natural and relaxed “well dressing” which reveals a strong multicultural spirit in its DNA. A sartorial accuracy which makes each piece a project on its own. The attention paid by the designer to processings and to the most innovative interventions on materials rebalances and declines to present the magical kaleidoscope of colors, patterns, embroideries, images and glamour which come from ancient Persia, from the legendary “silk road”.

The potential of Miahatami’s feminine seduction is certainly strong, but also fluid, multivalent and conceived so that the orientation between the looks which form the collection can be really free. Respecting a convention that Narguess sees as an imperative: “to choose and not to be chosen”.